The Wait: Music for Advent 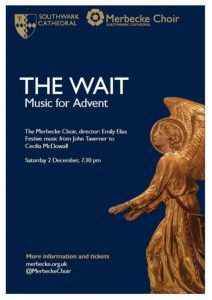 Join us for an evening of some of the greatest Advent music ever written.

Advent is a time of waiting and expectation as the church looks forward to the birth of Christ on the 25th December. In response to this, composers from John Taverner in the 16th Century to Cecilia McDowall in the 21st have responded to this theme of anticipation in beautiful, joyful and often haunting music.

The choir will be singing a selection of Advent music from across the centuries, including settings of some of the great ‘O’ antiphons usually sing at Matins during the last week before Christmas.

Come join us for a seasonal celebration of Advent music, including:

Tickets will be available on the door.